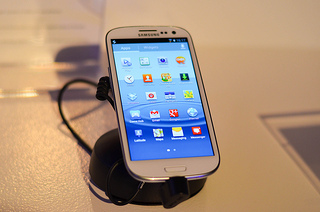 Right now, people are already feasting on the new Samsung Galaxy SIII with its amazing features such as the 2GB RAM, 16GB or 32GB storage through the micro SD card, dual-core 1.5 GHz Krait processor, 4.8-inch SuperAMOLED HD panel enhanced with a 1280 x 720 pixels, 8mp rear camera and 1.9 front camera, to name a few.
However, what most Galaxy SIII owners and spectators should realize is, there is another enhancement that is to come with this remarkable unit, particularly with the operating system. The Samsung Galaxy S III will soon be upgraded to the Android 4.1 Jelly Bean operating system. The Galaxy S III will be the first device that does not belong to the Nexus line of devices that will be receiving this Android operating system update.
The Jelly Bean update was launched on August 29th. However, this launch is only for the international versions which include the UK among the other countries. Although the Jelly Bean updates for the US and Canada devices are yet to be announced, people can expect this to happen soon.
While the Samsung Galaxy SIII is already functional and as we have mentioned earlier, packed with amazing features, people should be excited as to how this unit will be further improved. Below are among the notable features of the Android 4.1 Jelly Bean that people should fantasize on how it will be executed on the Samsung Galaxy SIII:
·         Improved notifications framework – Those drop down notifications are certainly effective in giving the user a quick information of new updates in the device. But with the Android 4.1 Jelly Bean update, people can get more than just quick information. Rich media and different types of content can now be seen such as photos. Users can also perform more actions from the notifications framework.
·         Improved app widgets – Users can now customize the look of their interface by resizing the widgets. As long as there are enough space in the menu where the widget is placed, users can resize it for better accessibility.
·         More efficient app updates – Updates will no longer take much time to finish. With the Android 4.1 Jelly Bean, people will only have to receive the bits that are changed, instead of the whole APK. This way, updates are faster and easier consuming less time, bandwidth usage and battery life.
·         Enhancements to Google Beam – Wireless connection can now happen not only between two Android devices but with Android and Bluetooth devices as well.
·         Additions to the TouchWIZ features –Users can manage their device even better with the addition of the dormant mode which will allow the user to change the alerts and notifications settings easier. The Easy mode setting is also an addition to the TouchWIZ feature which will make the operation of the home screen much simpler.
Final Words
The Samsung Galaxy SIII has been sensational due to the amazing features that came with it during its launch. During this status of this unit, it has been compared with other flagship devices by other leading manufacturers. But by having the capability to be upgraded to the latest Android operating system, Android 4.1 Jelly Bean, other smart phones should have a harder time beating the Galaxy SIII in the market.