Next day, Tara had left early.  Shekhar sent Roohi to school and worked on his freelance projects. Evening once Roohi came home, he spent some time with her.

Tara rang up & said she will be late and so, Shekhar & Roohi ate dinner and he tucked her into bed.
Since sleep eluded him, he decided to resume his novel from where he had left it.
It was 1 AM. Shekhar was working on a particularly difficult portion of his novel. He heard some sound in the next room. Probably he imagined it. He resumed his novel
Someone was watching him. Or maybe, there was more than one person watching him. The hair behind his neck stood on its end. There was definitely another presence around. He slowly turned & his heart skipped a bit. 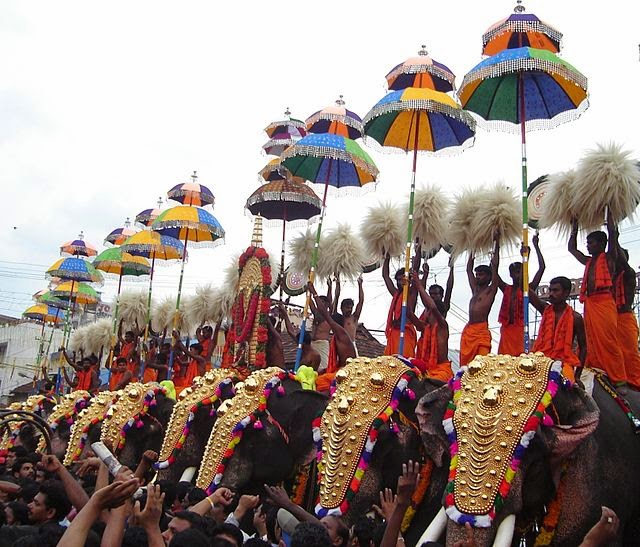 ‘What on earth are you doing standing there like that? You scared me!’
It was Roohi. She was holding her sleeping doll & standing in the doorway.
‘Papa, have you seen people worshiping snakes?’

‘Roohi! Have you been reading my paperwork?’

‘Papa please tell me, I am curious. Have you seen the idols?’
‘No.’
‘Have you seen processions with elephants, drums & people dancing on the streets?’
‘That is enough. Now go to sleep Roohi.’
‘Why Papa?’
‘Because it is 1AM and you have school tomorrow. And stop reading my paperwork from now on. They aren’t meant for you.’

‘I did not read your paperwork.’
‘Then where did you get to know about processions, elephants & snake idols?’
‘My friend Meera is from Kerala. There is a temple that belongs to her ancestors. It seems the temple opens once in 7 years. They have processions. Elephants, music, people dance on the streets, ladies remove their hair & there is some sort of a dance form, there is a pond nearby. She talks a lot about the things they do back there. Papa they worship snakes & they have many snake idols.’

Shekhar looked at his daughter wide eyed. He sensed something unnatural about her. About the entire scene. They weren’t alone. Or was he hallucinating due to lack of sleep?

‘I haven’t seen any of those. If all your questions are answered, let us go & sleep.’

‘No papa. One last question.’
‘What now?’
She pouted her lips & with all her energy, asked pleadingly,

‘Papa the Goddess there comes alive it seems. Can we go to Kerala for the processions during this vacation? Meera has invited us. Please please please?’

Shekhar’s eyes widened. He was speechless. He picked up her daughter, took her to her room.
‘Answer me papa. Please.’
His voice faulted.
‘Sleep Roohi. We’ll talk tomorrow.’
He never said ‘No’ to Roohi’s or Tara’s wishes. He lived for them & he loved fulfilling their dreams. But this one seemed wrong. He might be over-reacting. Or he might be right. He had no reason to say ‘No’ to Roohi’s this particular wish. But his guts screamed at him to stop things right there. The trip would be chaos. ‘
I’ll to your mom & let you know. For now you sleep. Alright?’
‘Alright Papa.’
She pulled his face close to hers and planted a kiss on his cheeks. He tucked her in and hastily walked into his study.
His hands were shivering. Beads of sweat formed on his brows as he fiddled with his novel. He frantically turned the pages back & forth. In his hurry, the book fell down. He finally, reached the page he was looking for.
It read…;
Holding his daughter’s lifeless body, Vimal remembered that fateful conversation he had with his daughter a few days back.
‘Achha, lets go to Lakshmi aunty’s house for this vacation.’


‘How come, this sudden craving for Lakshmi aunty’s house?’


‘Grandma was telling me stories about the procession at the temple there. I want to see the elephants, the procession, the deity with her diamond eyes.’


‘Your Grandma is the one spoiling you. You have to travel a lot to reach there Anu.’


‘Acha, please! I want to climb the mango trees, eat lots of mango, see the idols of the snakes, attend the Pooja and go for the procession. If we don’t go now, it will happen only after 7 years.’


‘And you know something? Grandma says,that the deity comes alive. How will she look Achha?’


Anamika’s eyes widened in wonder as she said that.


‘Nonsense! The procession is good. But the deity does not come alive.’


‘Achha is always spoiling things. I will ask Amma.’


Anamika walks towards the door.


She planted a kiss on his cheeks and ran away.

If only Vimal had said ‘No’ to her that day, he wouldn’t have had to hold her limp lifeless body in his arms.
Shekhar looked up from his novel. A small creepy sensation in his guts told him, that he was writing their future.

“Me and my team are participating in ‘Game Of Blogs’ at BlogAdda.com. #CelebrateBlogging with us.”